The Spanish summer brings many new things, mainly heat and deserted streets.  When I first arrived seven months ago I was so cold I never imagined that there would come a time when I would be uncomfortably hot in this city.  Summer in Valencia is extremely hot.  Most apartments do not have air conditioning so everyone lives with their windows open all day and all night (hello thieves, please don’t rob us!).  Many people also start hanging out of their windows and balconies, which leads to funny interactions with neighbors from different balconies and even with people on the street and people on the balconies.  It reminds me of Hitchcock’s Secret Window but you know, minus the murder part.

One funny interaction, for example, are two little boys directly across from me.  One is around 10/11, the other one maybe 7/8.  They stand outside their terraza in their underwear and loudly whistle at every single (older) woman that walks by.  The worst part is these kids are non-stop.  I had to shut my window when I was working the other day because between the whistling and singing Ozuna at the top of their lungs in their bright turquoise briefs, I just couldn’t hang anymore. #liveyourbestlife, though, kid!

Along with summer come several new quirks, the first being those hand-held Spanish fans. I didn’t think people actually used them in real life, but I was wrong! These fans are everywhere and it is so hot that no one blinks twice when they see someone using one. I myself have caved and bought a 2 euro fan that I take with me every time I leave the house and let me tell you—every time I pull that bad boy out someone is asking me to share the relief.

You know what else eludes me about gastronomy in Spain? The weird things they put in cans and jars. My two oddest finds so far have been canned, peeled, seedless, green grapes. Why? Pre-cooked potatoes in a glass jar. Why?

Since I’m on the subject of Spanish gastronomy let me take a moment to address the bizarre eating schedule. First of all, there are five different types of meals that may all occur in one day:

-Breakfast: Before the office

If you want to find anything to eat at noon you are out of luck. I am still not used to this eating schedule. The brunch/lunch time frame is what I find to be the hardest to adjust to. Why can’t I just eat once at noon? Why must I eat at 11, then at 2? Sometimes I eat at 11 and don’t eat at 2 and then my eating schedule is completely off from the rest of the country.

Another quirk about Spanish gastronomic culture comes with tapas. I’m sure you all know what tapas are, but do you know about the “piece of shame” that comes along with every single tapa? This is real, and I can guarantee you will bear witness to it if you share tapas with a group of Spaniards.  When the Spanish eat tapas, no one will eat the last piece on the plate. It is considered the “piece of shame” and it will sit on that plate for an eternity. When someone finally does reach for it, they always comment on it. “Fine, fine, okay, I’ll eat the piece of shame!” I don’t get it, so I normally eat the piece of shame.

Back to the Spanish heat.  It seems that I (and the rest of Valencia) will do anything to get some relief from the heat. On the longest day of the year, I had the opportunity to go sailing again. I was at work and my friend asked if I wanted to go sailing after work to which my answer was obviously yes. “Okay but the others have already set sail, so we’ll have to swim from shore,” he said. On our way to the beach it was again mentioned how we will have to swim from shore and that’s when I realized that it was not a joke.

Now, picture this: you’re minding your own business laying on the beach and a man and woman walk up to the shoreline. The man is wearing a giant bamboo hat he got in the Philippines and he and a girl are struggling to shove things into a waterproof bag.  They also have a plastic bag full of beer and chips, which they tie to the waterproof bag, then walk straight into the ocean and swim 200 meters to a boat.  Luckily, no struck anchors this time.

I wasn’t so lucky on my way to work last Monday. After around ten minutes of being on the bus it started going very slowly. I peeked at the front of the bus and didn’t see any traffic on the highway, so I was unsure as to why the bus was going so slowly. I started noticing other bus-goers looking confused, but the bus driver kept going. The smell of fire started to reach our nostrils, but the driver kept going. Finally, after several minutes of this nonsense an intense amount of smoke and flames burst from the back of the bus and that’s when panic ensued. Everyone started yelling at the bus driver to stop, which he finally did. Once the bus was stopped, someone yelled “oh my God, the doors won’t open!” and more panic ensued. Everyone started screaming at the people near the doors “just break it down, break it down!” but with no emergency hammer in sight (it was stolen), people started kicking down the doors.  Once the doors were open, people stampeded and we were then kept on the side of the highway for 45 minutes while we waited for someone to stop eating one of their five meals and pick us up.

Last but not least—you know what else comes with summer in Spain?  Summer schedule!  That’s right, it’s now even harder to move around with public transportation and stores are open even less than they were before!  Because of course it makes sense, now that it’s 34 degrees Celsius, to make the bus stop farther away than it was before.  And of course it makes sense that now the stores are only open on Saturday mornings—which gives you a cool four hours to run absolutely all of your errands, along with everyone else.

In case you don’t believe me about just how hot it is, here are some photos I took, and you’ll notice—not a single person in any of them because they were all in terrazas avoiding the scorching heat.

A storm over Valencia’s rio Turia 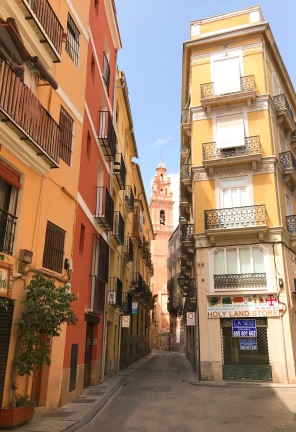 A deserted street in Spain 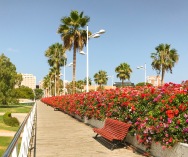