Valencia, Spain, you are a beautiful city.  The pink morning sunrises on the walk to the bus stop, getting lost in your twisting roads (where google maps doesn’t work) and stumbling on a scene more beautiful than the last— be still my heart!

So, here are some more funny cultural differences between life in America and life in Spain.

Let’s start with the electricity.  When I was looking at apartments, I found one that had a dryer and I knew how unusual that was.  Then it made me wonder exactly why it was so unusual.  I mean— electricity couldn’t possibly be that much, right?  I remember getting electricity bills for $12 in the United States.  Seriously!  $12!  And during that time I was home more often than I am home now (which is almost never).

The laundry thing— not wanting to do laundry because my clothes will take over three days (yes, three days) to dry.  “Seriously, Spain, how expensive could electricity be?!”  I live in a 50 square meter apartment (that’s 538 square feet, to my American readers.  Yes, about the size of a Montecito bathroom, to my Santa Barbara readers.). Well after doing laundry less than a handful of times, and barely being home, I got my first electricity bill!!  Surprise, Alexia!  It’s €100 ($125 USD).

I’m not kidding you, I literally walked over to the fridge with that bill in my hands and I unplugged my fridge.  My Coca Cola and olives don’t need to be that cold, thank you very much!

I was floored.  “Ooooohhh okay, that’s why they don’t have dryers”, I said out loud— to no one.  I was struck by a memory, now ten years old, when I was studying abroad in Italy.  There were no dryers there either.  My roommate and I had to hang our clothes on a clothes line that hung over an Italian person’s cute yard.  Well, there was always one of two ending scenarios when we did laundry:  We either forgot the laundry was there, and then it started raining.  Or, it would fall to previously mentioned cute yard.  This led to me having to walk down there and knock on some guys’ door and ask him if I could pick up my underpants that fell into his yard.

Anyway, back to my insanely expensive electricity bill.  I started thinking about all the cute clothes I could have gotten with all those Euros.  Damn power.  Who needs it, anyway.  I can sit in the dark!  (And I have, many times since then.)

I looked into my electricity bill.  How could I make this sh*t cheaper, and why was it costing me $12 in the States?!  What gives.  So apparently electricity is so expensive in Spain you can choose specific “time frames” where you get a (small) discount on your hourly rate.  You can choose if you want to have electricity:

1. At all hours. (With an emoji of a stupid person and a big question mark on the top of their head.) (FYI: I am not making any of the additional advertisement details up.)

3. On the weekends. (“Enjoy watching TV from the couch!”)

4.  At night, until mid-morning. (With an emoji of a person sleeping in their bed with the moon up.)

Well of course I looked into option 4, “at night, until mid-morning”.  Now, we all know the Spanish have a “late” lifestyle.  They eat very late— I went to a company dinner that started at 9:30 and no one even got there until 10 (and it was a Wednesday).  But you would think the “at night, until mid-morning” plan would be something useful like, I don’t know, 7pm-9am or something.

Nope.  What do they consider “at night, until mid-morning”?  10pm-noon in the winter, and 11pm during the summer!  That means, no laundry, no taking a shower, no washing dishes, or cooking for a (slightly) cheaper rate until TEN O’CLOCK at night.  That is a lot of stuff to get done so late at night.  My hair is never even dry until I get to work the next day, sometimes over 10 hours later.  Now I have to take a shower at 10 pm!?  Thank you for helping me save money on electricity while I sleep, Spain!

Next, there’s the insane process of trying to get your residency. Welcome to the world of Spanish bureaucracy, Alexia!  If you’re planning on staying in Spain for more than three months, you must apply for your residency.  It doesn’t matter what country you’re from, EU citizen or not, you gotta do it!

Fortunately for me, I had an Italian friend who went through this process and told me it took him three different visits to the police commissionary station to get one part of the process done.  Three times! So I went into it with the mentality of “it’s going to take me three times.”  I have my folder that I carry with me that, essentially, has my entire life in it and I still knew there was no way I was going to be able to do this process all in one day.  (For people with a 40+ hour a week job know, this means taking more time off from work, which— you know, hustle.) Honestly though, I didn’t even care.  I walk everywhere here (I walked over 10km the other day, just wandering around) and I love discovering the Valencian streets.  The mission to get my residency took me to a part of Valencia I hadn’t visited yet, and it was beautiful!

On to other topics!  For those of you not in the know, Valencia has a festival every year during March that is just epic beyond words.  It is so epic, in fact, that it is now a UNESCO festival for being a “representative of intangible cultural heritage of humanity”.  Or, you know, as Wikipedia says “a continuous street party [where] crowds spill out into the streets [and] explosions can be heard all day long and throughout the night….everyone from small children to elderly people can be seen throwing fireworks in the street.”  #samething.

To give you a bit more information, the Fallas are a tradition that started in Valencia in the Middle Ages.  It is a religious festival in commemoration of Saint Joseph and it takes place “technically” the 15th-19th of March.  In reality, I’ve seen events, fireworks, girls in traditional dresses, ninots, you name it, since the beginning of February.

Each community in Valencia has a team of “falleros” who create incredibly intricate paper mache statues— called “ninots” (that they spend a year building).  Each day on the official week in March, each community displays it’s creations.  Then, on the last day— brace yourself— they burn every, single, intricate, work of art, paper mache statue in the streets.  This day is called “La Crema”.  The next day, they start working on their statues for the next year.

Well, it turns out that during the month of February, each community gives one of their “ninots” to be put on display at the Art and Science museum.  The people (and tourists) of Valencia, can go and see an exposition of these ninots, and then vote for whichever one they want to be spared from the flames.

Obviously, I went to vote.  I spent over two hours at the museum, in awe at the art and saddened by the fact that all but one would soon be burned to the ground.  You can see some photos at the bottom of this post to see exactly why I would be sad about these creations being burned to the ground.  Seriously, I haven’t felt that much pressure to make a decision since— I don’t even know when.

Last point for today: it takes over a month to buy a bus pass.  Why?  Is it made out of gold? (It isn’t.)  I don’t get it.  But yes, you must apply for a bus pass, include your passport or ID, the name of each of your family members, your first born— okay I may be exaggerating with the last few, but you gotta apply for a bus pass and then wait a month.  Yeah, I don’t know, ask Spain.  I’ve got to go wash my hair now, it’s past 10, so I can use the electricity. 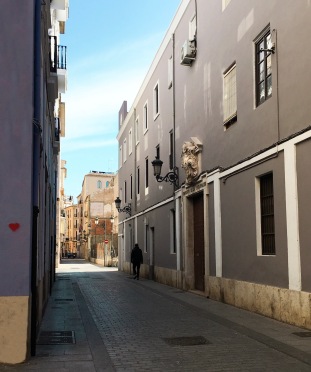 A few of the options to be saved from La Crema.