This past summer my boyfriend, Zak, and I took a trip to Europe for 5 weeks. We spent most of our time in London, however we spent 10 days travelling across Poland and on to Prague. Now, I am the sort of person that ridiculous things happen to. I swear. No matter what it is, or what crazy story I have, it always ends with my friends saying “ONLY TO YOU, ALEXIA!”

This is one of those stories.

Zak and I were due to leave to Poland on a Monday. We were going to visit the country as well as to attend my cousin’s wedding in Warsaw. We were flying on good ol’ Ryanair, which has its pros and cons, but considering myself an experienced traveler, I didn’t see any glitches in the future. We had completed the online check-in, put in our passport information, printed out the tickets at the local library, purchased train tickets to the airport- we were set. So there we sat, on the train toward Gatwick, perfectly calm, munching on our paninis, looking out at the sun shining over London. We arrived at Gatwick well before the recommended 2 hours, made our way through the airport and came across a barrier of electronic ticket scanners. Nonplussed, Zak began to try to scan his ticket only to have a “Seek Assistance” sign pop up. Still nonplussed, Zak went up to the man assisting people and simply held up our printed Ryanair tickets. Then, it happened.

The man said nothing for a long time. He seemed shocked. He looked up and looked at me, looked at Zak, then looked down at the ticket again.

I was confused. I didn’t understand what he was saying. Zak and I just stared at him in bemused silence.

-“Your ticket says Stansted,” he repeated. “You’re at Gatwick.”

Zak simply didn’t say anything, but I’ll tell you one thing, I will never forget that look on his face.

I looked at the clock. It was 9 am and our flight was due to leave at 11. Knowing a bit of London geography and judging that we had been on the train for an hour from the main tube station, I knew we’d be cutting it close. (Okay. I knew we wouldn’t make it, but a girl’s gotta try.)

So after running around the airport like a chicken with her head cut off trying to figure out the next plan of action (while Zak still said nothing) I realized our only option was to get to Stansted as fast as we could.

The entire time we were running through the tube station I had that Home Along song that they play when the family is running through the airport stuck in my head. You know the one, and kept singing it out loud to Zak, pumped up on an insane amount of adrenaline.

At one point I apparently thought I was Wonder Woman and was carrying my *heavy* carry-on above my head with one hand, up 30 flights of stairs with a torn meniscus.

It was 10:30 and we made it to Stansted. Then I remembered the Visa Check that Ryanair does. The desk was empty and there was already a line of 30 passengers looking around wondering themselves where the man was to check their visas. All of a sudden, before anyone knew what hit them, Zak ran behind the desk and stamped his own ticket with the visa check (to this day the most baller thing I’ve seen him do) we continued our mad dash while the line of passengers gawked at him in disbelief.

10:40am and the insanely long security line was moving like ants and of course my bag got pushed aside to get checked. I tell Zak to run ahead and as the security man is checking my bag he says the now infamous line, “Have you got mustard in here, love?”

Unfreakingbelievable.  One of Zak’s birthday presents. (YES, it was mustard, ok.)

Once that never-ending situation was finished, I grabbed my bag, turned the corner and saw Zak standing there. We missed the plane.  The first airplane in my 26 years of “experienced traveling” that I missed. (I should get my passport taken back, I mean, going to the wrong airport?)

After a hefty $200 re-booking fee (for a ticket that was originally $25, DAMN YOU RYANAIR!), 5 hours in the airport & being wheeled around in a wheelchair by Zak (the meniscus won), we made it on our new flight to Warsaw sans excitement.

Fast forward through a fabulous week in Poland. We were leaving Krakow that night and taking a night bus to Prague. It was 1/3 the cost of the expensive night train and almost the same travel time, so why not?

Somehow the 2 hours went by fast and before I knew it Zak and I were running around with the Home Alone music blearing through my head again. We were drenched in sweat, sprinting around the entire bus station doing Wonder Woman maneuvers again. Thank the heavens (and my grandma) I speak Polish and after asking: a security guard on his phone, 2 city bus drivers, 1 road side worker and 1 taxi driver I was given a vague area of where the bus “might” show up. “This is Poland,” I was told, “What do I think? Buses come on time? The bus will come when it comes.”

It was almost 9pm, the time our bus would arrive. Zak and I looked at each other covered in sweat, threw our hands up in the air and decided to give in to “whatever happens, happens.” We went to stand by where the bus “might” arrive, sat down, and relaxed.

After around 15 minutes, we saw a funny sight. There was a group of people around our age, running around and sweating profusely, just as we had been moments earlier. They looked equally as frazzled, worried and stressed out. As one of them ran by us I simply yelled “PRAGUE?” and he stopped dead in his tracks.

-“YES!” he screamed, as he called the rest of his group over to us.

There is strength in numbers. Suddenly neither they were worried, nor Zak and I were worried. If we all missed the bus, at least we would all miss it together.  Another (very sweaty) woman ran by us, to whom again I yelled “Prague?” and she also stopped dead in her tracks.

Before we knew it there was a group of 10 of us, sitting on the ground sharing food and stories, our bus worries behind us. Sort of.

Sure enough at 11pm a bus turns up. With its signs on the front in…..Russian? 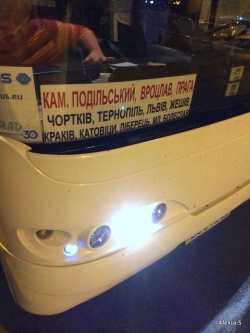 -“Oh yes. This bus goes to Prague,” one of our new friends said to us.

-“Yes. It just came from Ukraine.”

UKRAINE of all places.

But in the spirit of “whatever happens, happens,” Zak and I got on the bus.

Once inside, that spirit decreased a little. The bus was almost completely filled with sleeping Ukrainians. The windows were dripping with moisture and there was a frozen Chevy Chase Christmas movie on the little tv in the front. We stood there for a minute in shock, not knowing what to do until a Ukrainian man who just wanted to get this show on the road moved so Zak and I could sit together and get a move on.

We sat down, still not having said anything to each other while we watched one of our sweet new friends tap a sleeping Ukrainian lady and ask if she could sit next to her to which she received what I’m pretty sure was a big “F you” in Ukrainian.

After some flustered minutes the dark bus rolled forward, while all Zak and I could do was laugh. For 10 ½ hours. With no working toilet. On a bus from Ukraine. 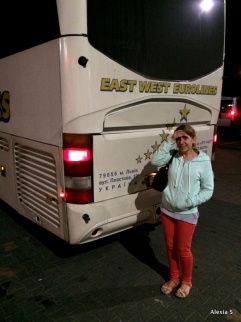 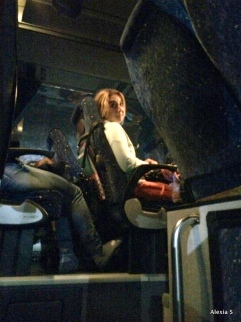 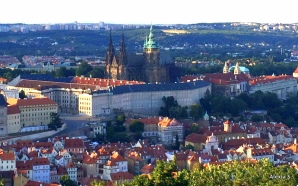 2 Responses to “[Missing] Planes, trains and automobiles (and buses)”